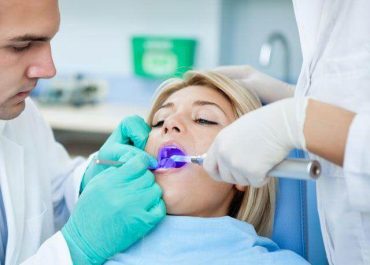 Periodontium is the name given to the whole of the tissues surrounding and supporting the tooth. It is a complex of gum, periodontal space and alveolar bone.

Periodontology, or more commonly known as gum diseases speciality, is the branch that deals with the diseases of the connective tissue surrounding the gums, teeth and the bone structure of the mouth.

One of the symptoms of gum diseases is bleeding in the early period. This stage is called “gingivitis”. Bone loss may be prevented if spotted early. Thus, you should see a physician if you have symptoms like redness, swelling, bleeding and mild pain. If that’s the case, dental cleaning should be performed and then the area can heal.

To prevent this problem from recurring, the patient should pay attention to oral hygiene. If gingivitis is not treated, the disease progresses to “periodontitis”, where plaque can advance under the gums. If periodontitis progresses, the bone that supports the teeth can get thinner, which results in tooth loss.

When a gum disease starts for any reason whatsoever, first our gums swell, bleed and begin to signal that there is a problem.

What is Dental Calculus Cleaning?

Bone resorption is effective in determining the level of the disease.

There is a false perception going “Gaps appeared between my teeth after the tartar cleaning”. If the patient has lots of tartar and the cleaning is done and there is the possibility of gaps forming between teeth. Patients may think that this is due to tartar cleaning, but it is not.

The tartar accumulates, pushes the gum and gradually melts the lower bone, then, it settles there. Thus, when the tartar is removed from the area, gaps may form. After the treatment is done, gaps do not come back anymore. However, the gingival recession that occurs between the teeth cannot be treated and papilla cannot be replaced.

“The reason for the formation of gaps is gum disease, not tartar cleaning.”

What is a Periodontal Pocket?

Normally, the gum sticks firmly on the tooth. There is a maximum gap of 1 mm. This is the size of a healthy gingival groove.

When gum disease starts, the gum swells, loosens, bleeds, and separates from the tooth. As the gum gets separated a gap begins to form. This is called a periodontal pocket. The depth of the pocket indicates the level of periodontal disease and how to treat it.

The depth of bone resorption determines the treatment method.

Early stages of bone resorption is around 0-33 mm. After tartar cleaning, the gum sticks on the tooth in its original form and returns to its former healthy state. Therefore, bone resorption stops and does not progress anymore.

What is Dental Plaque?

After each meal, a microbial dental plaque layer is formed by combining food residues and saliva. This plaque on teeth, which is a creamy substance and light yellow, gets plastered on the tooth surfaces. The plaque is a residue with a high bacterial load. It can be removed from the mouth by brushing teeth.

If a good plaque cleaning is not done in the mouth the minerals on the saliva settle on the plaque and forms tartar. After the tartar is formed, we can’t brush it away from our mouth. At this point, you must consult a dentist.

If a good oral care is not done, tartar forms in the teeth can cause gum diseases.

Tooth stone or tartar, has a hard but sponge-like, perforated and rough structure. It both physically irritates the gums and causes the gums to get sick due to the toxins secreted by the bacteria in its content.

If there are tartar teeth in your mouth, there is a possibility of a developing gingival disease.

Why Is Tartar Cleaning Important?

A study conducted in the United States shows that individuals who care about oral and dental health and have regular tooth brushing habits are less likely to have Alzheimer’s and dementia later.

How Does Dental Calculus Occur?

The colorless formation on our tooth enamel left by bacteria is called bacterial plaque. Bacteria plaque starts to form 4-6 hours after eating if the tooth is not brushed. If we do not adopt proper tooth brushing habits, the bacterial plaque turns into tartar over time.

What are the Symptoms of Tartar Formation?

Tartar is a hard structure. The accumulation of it on the tooth surface increases in time and prevents the gums from staying healthy. Then, gums can start to bleed and probably get inflamed.

Tartar shows itself especially on the lower incisors’ inner surface, since this area is the most difficult to clean and overlooked. When tartar begins to appear below the gum line, it manifests itself with swelling that causes bleeding. When the color of the gum starts to turn yellow or bronze, tartar becomes larger and larger if not removed. When the brown and black residue formed under the gum line are not removed, they damage the gum.

When tartar remains on the tooth surface for a long time, it affects all gum health and can cause serious problems that can progress to tooth decay, inflammation and bone loss.

Once the tartar is formed and settled on the tooth surface, it can only be removed with a dentist operation. This process is called tartar cleaning or detartrage.

Tartar cleaning can be repeated twice a year during your routine dentist checks.

The devices used for this operation does not cause any damage to the tooth surface.

What is A Curettage?

Inadequate oral hygiene and dental calculus formation may cause gaps in some areas of the teeth and may cause gingival recession and osteoporosis on the roots. In this case, since tartar cleaning is not sufficient, a deeper cleaning “curettage” treatment is performed to clean the root surfaces.

How to Prevent Dental Calculus?

You should brush your teeth properly twice a day and do not neglect the use of dental floss and mouthwash. Regular and thorough oral care will help prevent tartar formation.